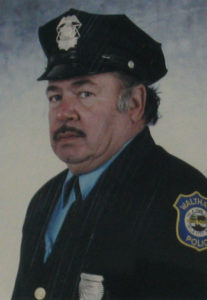 The WPRA regrets to announce the passing of Retired Officer William Dahlbeck.  Thank you for your service to the City of Waltham.

William W. Dahlbeck of Watertown, passed away peacefully on Monday evening May 4th, 2020 in the Meadow Green Nursing & Rehabilitation Center in Waltham after complications of the COVID-19 virus at the age of 89.Born on December 5, 1930 in Boston; son of the late Henry Dahlbeck and Catherine Dahlbeck (Scarborough)He is survived by his wife, Eva Dahlbeck (Leger), Flora Dahlbeck (Tedeschi) Predeceased.Daughter Carolann and husband John Giles.Sons, William Jr., Dana and Wife Janet, and William Leger and Wife TereseGrandchildren, Jason Giles and wife Julie, Nicole Velardi and husband Andrew, Jennifer Pike and husband Mark and William Leger Jr., And Great Grand Children, Kaitlyn & GabriellaHe was a long time member of the Masonic lodge in Newton, MAAfter retiring from the Waltham Police Department he balanced his time between Waltham and Dania FL. Spending much of his time volunteering with the Broward County Sheriffs Dept, The less fortunate and friends of Bill W.He was always quick with a joke. His volunteerism had a large impact on many lives that will live onFor the safety of those we love and care about during this difficult time, funeral services will be private. 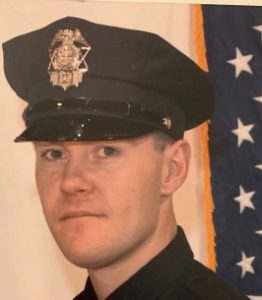 Age 33, passed away peacefully at home on December 6, 2019 following a courageous battle with brain cancer.

Officer Gryska was born on January 9, 1986 in Newton, MA to Dr. Paul vonRyll Gryska and Margaret (Holmes) Gryska. He was a 2004 graduate of Medfield High School and a 2008 graduate of the University of Massachusetts at Dartmouth, where he graduated with a degree in Criminal Justice and was a Captain of the Football Team. It was Charlie’s life-long dream to pursue a career in the law enforcement field. In 2012, he graduated from the New England Regional Police Institute and was simultaneously working as a member of the Security Department at Massachusetts General Hospital. Upon being hired as a member of the Waltham Police Department in 2015, Charlie attended the Reading Police Academy and began his work as a patrolman.

Born on May 29, 1930 in Somerville; son of the late John H. Russell Sr. and Daisy (Tiffany) Russell, John was a resident of Waltham for most of his life.

John was a proud Veteran of the United States Army serving during the Korean War.

John was an active and devoted member of the Waltham Masonic Lodge; serving twice as Past Master before it became the Triad Lodge A.F. & A.M. Freemasons. He also served as Past Master of the Police Square Club.

He was a motorcycle enthusiast and was a Founder & Past President of Mass Chapter VII of the Blue Knights.

For over 35 years, winters for John and Nancy were spent in their motor home and on a motorcycle traveling around the United States and Canada. He loved golfing and finding new restaurants. He enjoyed keeping busy.

John is survived by his beloved wife of 69 years Nancy (Oberly) Russell, his loving children John E. Russell and his wife Geraldine (Gloddy) of Spencer; Kevin T. Russell and wife Susan (Halpin) of Bellingham; and Sharen, Karen and Wendy Russell all of Waltham; and his dear sisters Donna West-Reid of Waltham and Beverly Azzaline of Nazareth PA. In addition he is survived by his cherished grandchildren and many nieces & nephews.

Relatives & Friends are respectfully invited to attend a Memorial Service in celebration of John’s Life in the Mary Catherine Chapel of Brasco & Sons Memorial, 773 Moody Street, WALTHAM, on Thursday afternoon July 25th at 3:00 p.m. Services will conclude with United States Army and Waltham Police Honors in recognition of John’s faithful and honorable service to his country and the City of Waltham. Visiting Hours will be held in the Mary Catherine Chapel on Thursday July 25th from 1:00 – 3:00 p.m.

Ed was a member of the Waltham Police Department for 18 years.

Relatives and friends are respectfully invited to attend a Funeral Service in celebration of Edwin’s life at the Mary Catherine Chapel of Brasco & Sons, 773 Moody St., Waltham, MA on Wednesday, December 12, 2018 at 10 am. Visiting hours will be held Tuesday, December 11, 2018 from 4-8 p.m. in the Funeral Home and Wednesday from 9:30-10 a.m. in the Chapel. Interment, Mount Feake Cemetery. Parking attendants will be on duty.

The WPRA Regret to announce the passing of retired officer Robert “Red” Fisher. Patrolman Appointed 02-06-1959 retired 01-29-1987.  Arrangements are incomplete at this time.

Family and friends will honor and remember Dave’s life by gathering for calling hours in The Joyce Funeral Home, 245 Main Street (Rte. 20), Waltham on Sunday, October 21st from 4 to 7 p.m. and again on Monday morning when his funeral service will be held at 11 a.m. Burial will be in Mount Feake Cemetery, Waltham.